Jiro ramen that attracts many people and does not stop.

The power of the appearance is enormous, and once you eat it, you may end up with a bite.

This time, we will introduce carefully selected shops where you can eat Girorian recommended Jiro inspired ramen.

Please try to go by all means.

Personally speaking of Jiro ramen in the Sannomiya Ekimae area, I think it is this shop.
There are few seats, and there may be a waiting time until entering the shop, but it is very easy to go because it is within walking distance of Sannomiya Station.

It is a reason why you can recommend a combination of unique thick noodles and rich soup based on soy sauce.
There are also Tsukemen, but it is not a seafood soup.
Why don’t you try the completed menu with professional baseball players coming to the store?

I ask you to stop by the shop for vegetables, garlic growth, and menma toppings (occasionally back fats) with maruju ramen tonko.
It was a favorite taste for a long time, but it is my favorite ramen shop because it becomes more delicious.
From the ramen shop next door, it is here. 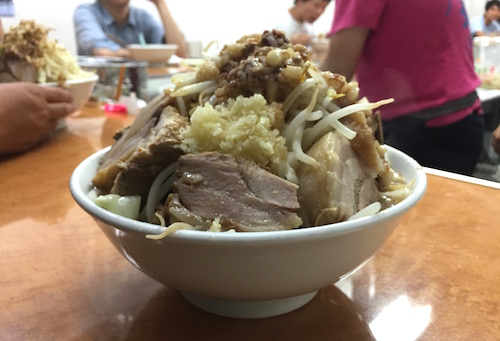 It’s been over a year and a half since I’ve been going there.
At first I was a woman, and it was difficult to go to see if the rules were difficult, but now I go almost every week.
It’s as delicious!!
I can’t say anything at first. It’s too delicious…!

Rough rules and systems for beginners as of October 15, 2021

(1) After the guests are present, buy a meal ticket before lining up. When buying, two people put in the store at the same time. The door closes immediately each time. Even if there is a person who returns, it is immediately closed because it is careful as soon as it opens with care.
The person who wants to make it small takes a white washing scissors.

(3) When the turn comes, take water, wet towels, chopsticks, and bricks and take a seat. The meal ticket is on the desk. Luggage at your feet. Don’t put it in the aisle. For large luggage, go to the back of the shop.
There is a hanger to put on a jacket, but it seems to be warned when you put it on.

(4) When the noodles are boiled, what about garlic? Because it is asked, if the seat is far, say “less vegetables with garlic” in a loud voice

(5) Eat. I don’t have time to talk. The photo is that if you take only one ramen quickly, you will not be angry . After that, do not touch the smartphone.
It is natural not to leave it, but if you do not have more noodles, you will not be angry, so you will not overdo it.
When I finish eating, I have to go outside, so I stand up with a wet towel and put it in the orange basket under the bricks. Don’t forget a word of feast.

That’s all I remember.
Check out the rules! It is often written that … For the time being, I wrote the flow in Rokko for people who do not know at all.

If you are interested in Jiro-based, you will not know unless you try this, so come to see it. I think that it is good to start from small with garlic.

It is a completely different style from the surrounding ramen shops. Water bottles and plastic bottles seemed to be ok, and some were brought.
If you eat silently, you will not be careful.

There was a person who forgot to say about the vegetable only by saying that there was garlic, and disregarded saying immediately, and after it was completed, “What is the vegetable?” When I saw that it was said, I thought it was a little terrible … That’s the style.

I think that it is a shop that goes alone basically.

First of all, the answer of the clerk (probably foreigner) was impressive, and when I asked the amount of noodles when I reduced the noodles and changed the amount to a taste ball, they taught me carefully.

It was my first time to order ramen. Because I went alone, I changed 200g of noodles to a small 150g when it became a situation to leave, and I had you top with a tasted ball and left vegetables and increased it because it was strictly prohibited.

I heard in advance that it was assari eyes by word of mouth, so the garlic abra also increased.
Even two pieces of thick char siu with enough volume were full of umami and went well with morimori bean sparity.
Ajidama has a strong eye.
The vegetables contain only a little cabbage, but almost sprouts.

The soup was assari more than I thought, and it was not so hard to put garlic.
May not be enough for those who are used to eating this line of ramen?
That feeling of becoming addicted was thin.

I wanted to eat the Jiro system, so I became independent from Jiro in Ikebukuro and Kabukicho.
It is impossible for Jiro (?) The clerk’s affability is also good.
Even if you can’t make a call, they’ll listen to you.

So-called Jiro ramen restaurants.
It can be topped with vegetables, garlic and blotting.

Homemade noodles are thick noodles and char siu is thickly sliced.
The only seasonings on the table were ramen soy sauce and pepper.
Please note that it will be extra charge if you leave it better.
It is recommended before noon because it will be a line in the afternoon.

Jiro Inspire Ramen is delicious, isn't it? This time, I would like to introduce inspire ramen in Yamaguchi Prefecture...

Mashimashi vegetables, too much back abra, large amount of garlic, Jiro inspire ramen that addicts never stop. There...